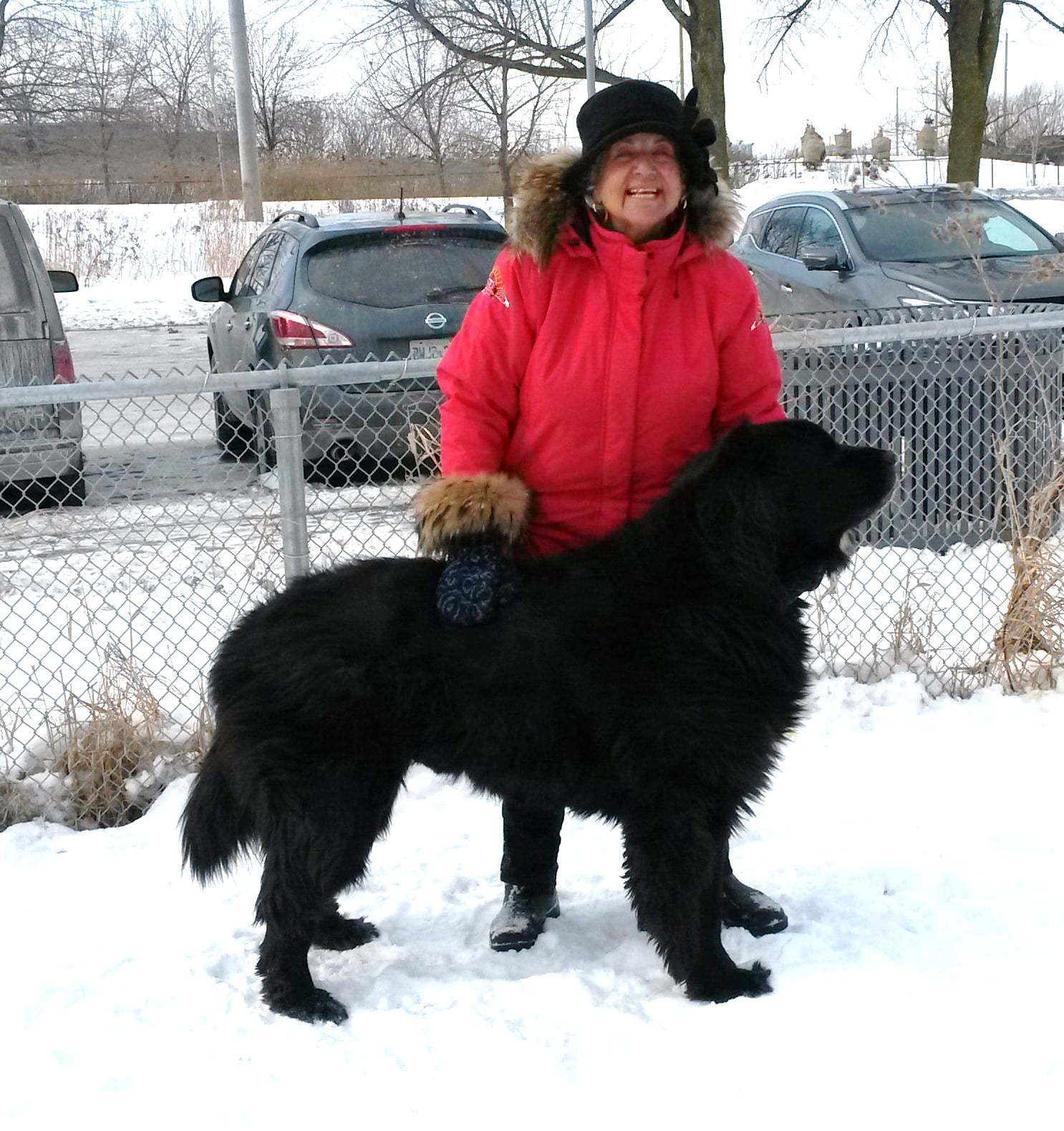 Mary Lou and Her Three Bears

If you see Mary Lou Gregoris arriving at the dog park, you may think at first that she is being followed by three large black bears. Mary Lou will tell you they aren’t just bears, they are very lovable teddy bears. This would be quickly confirmed to anyone who wishes to give these huge, furry creatures a hug. Two of Mary Lou’s teddy bears, Bogart and Satchmo, are Newfoundlands, while Maggie, a Flat-coated Retriever, just thinks she is one.

Mary Lou has always been fascinated with the Newfoundland breed for its loyalty and devotion to its human companions. The Newfoundland has been called “The Benevolent Dog” due to its sweet and gentle disposition and its willingness to help its human friends, even to the point of risking its own life. The Newf, as it is affectionately known, is a powerful swimmer with a double coat; the undercoat is waterproof. At one time, every fishing ship in the Maritimes kept a Newf on board. These ship dogs became legendary for rescuing people from the cold, choppy Atlantic, as well as swimming through treacherous waters to shore with lines to secure ships.

Mary Lou especially loves the story of Gander, the legendary Newf who accompanied the 1st Battalion of the Royal Rifles to defend Hong Kong against Japanese invasion in 1941. Gander bravely defended his troops by barking at and charging Japanese forces. His final act of bravery was to grab a hand grenade that was thrown into the midst of his troop and run away with it in his mouth. The grenade exploded as he ran, killing him. For his heroism, he was awarded the Dickin Medal, which is the animals’ version of the Victoria Cross.

Mary Lou got her first Newf, Satchmo, as a puppy from a breeder, but has decided that from now on she will only adopt rescue dogs. Maggie came from the Parry Sound SPCA. However, two large dogs just weren’t enough for Mary Lou. She discovered Newf Friends Newfoundland Dog Rescue on line and quickly spotted a huge and handsome 7-year-old, aptly named Bogart. She needed a dog that would get along with Satchmo and Maggie, as well as children, since she has grandchildren who visit often.

“Newf Friends is very honest about pairing the right dog with the right family,” she says. “They want it to be a forever home.” A woman from the rescue group came to interview Mary Lou and her husband at their home to ensure a good fit. It turned out to be a perfect fit. “That boy came into our house, laid down on the kitchen floor and sighed, as though he was saying, “I am home.”

Both Satchmo and Bogart are St. John’s Ambulance Therapy Dogs. They work with the elderly and with autistic children.

Many people ask Mary Lou about owning a Newf. “If you don’t like lots of dog hair, drool, gentle giants lying about the house, or dogs who will Velcro themselves to you for your companionship, then a Newf is definitely not for you! I say that’s a small price to pay for total devotion, companionship, and unconditional love.”